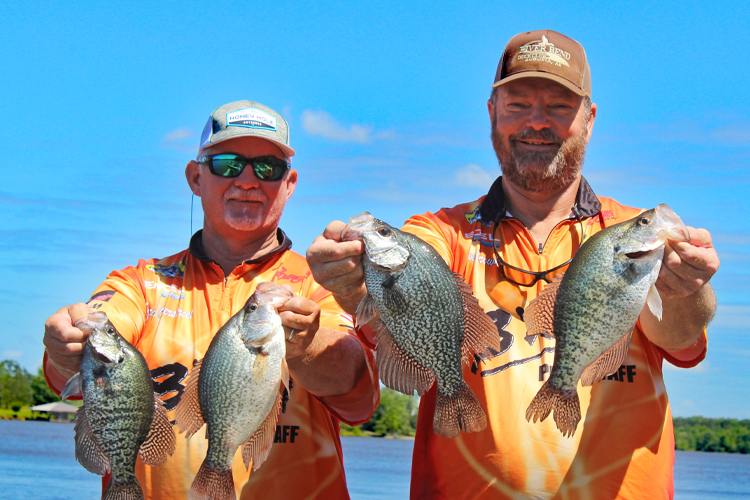 Mixing a fishing trip with family vacation can be exciting and memorable. In May CrappieNOW and its sister magazine, CatfishNOW, partnered with the Elmore County Economic Development Authority for a media event, providing writers and anglers from across the country with a fantastic taste of all the area has to offer. Using the Hampton Inn in Wetumpka for home base, the visit included fishing trips on the nearby Alabama River along with tours of several family-friendly spots.

“July is a great time to fish here on the Alabama River,” says local angler and crappie tournament fisherman Steve Brown. “The high water of spring should be gone and the river gets on a regular generating schedule so it’s stable and consistent. The fish have moved out of the creeks and are in the river.”

Brown says visiting fishermen should look for structure including treetops and stumps. Current and light penetration plays a big role in fish depth but it is difficult to predict, with eight to 22 feet being the typical range. He recommends using your electronics to see the depth of the fish.

“Summer stability means fish will get on a pattern and stay there, so after you find them they should be there for days,” says Brown. “A little current is good. A turbine or two running gets the fish more active. We have two rivers with dams above and one below, so their combination determines current, but unless there are heavy rains, it won’t be a problem. The fish know to get into their ambush spots when the water starts running because there will be some shad coming by so it will be time to feed. Drop a bait down to them and the fight is on.

“…a fisherman can use a variety of techniques to catch crappie here on the river.” – Steve Brown, Professional Crappie Fisherman

“Another great thing is a fisherman can use a variety of techniques to catch crappie here on the river. LiveScope is good, but so are traditional techniques including a cork and minnow, vertical jigging, casting a weedless jig, spider rigging and drop-shotting. All of those techniques will work, especially with live bait.”

Brown uses BnM poles and matches the pole to the technique. For example, he might use 14-foot jigging poles to spider rig, but switches to a seven-foot spinning rod for drop-shot fishing in heavy cover. He says the shorter pole provides more control for a straight up and down presentation. MidSouth Tackle tubes are his go-to jigs but he mixes in plenty of minnows when the water gets hot.

Brown says the Elmore County portion of the river is good and so are the lakes. “The lakes have a variety of depths and cover so they are good all year long. Up river where the Coosa and Tallapoosa Rivers come together, above Parker’s Island, crappie fishing is usually very good.”

Mack Daugherty, Elmore County Commissioner, says, “The north end of the county has Lake Martin where people come to fish, enjoy recreation and have a good time. Kowaligia includes a large, full-service marina, nice restaurant and outdoor church. The Church in the Pines is an A-frame structure that will seat 900 people. It’s close to the water so boaters can pull into the cove, turn on the church radio frequency and listen to the service on the water. The church and the cove is packed on Sundays during the summer. There is a state park about ten minutes away where people can camp. Nearby Children’s Harbor is a ministry that serves seriously ill children by hosting burn, cancer, transplant and ventilator camps where children and families can enjoy the lake and outdoors away from the hospital setting.”

The Hampton Inn is a great place to stay for a family vacation and/or to fish the Alabama River, Lake Martin, Lake Jordan and the Coosa and Tallapoosa Rivers. Downtown Wetumpka has been in major renovation with sidewalks, storefronts and businesses maintaining an old-time look with a modern-day flare. The town was recently featured on HGTV Home Town Makeover edition.