Put out the lights, the party’s just beginning 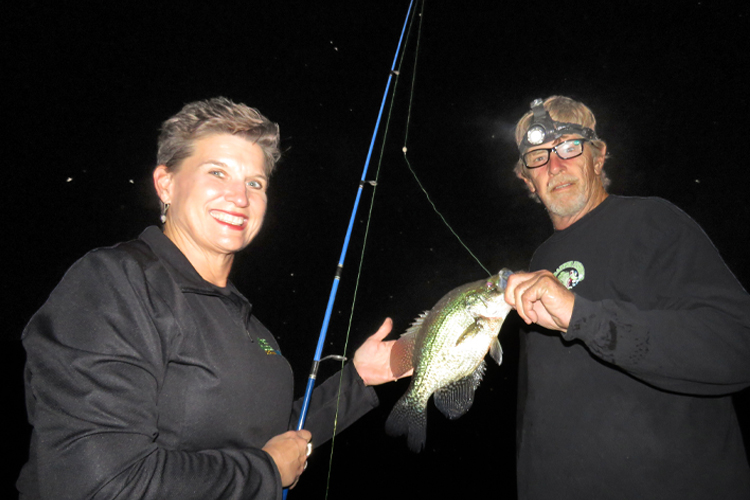 Hot summer temperatures make for uncomfortable crappie fishing. However, there is an easy solution to the problem – fish at night!

There is more than comfort to be gained. Sure, the temperature cools as the sun goes down but so does the number of pleasure boaters, personal watercraft, and traffic in general. Sometimes you have the whole lake to yourself.

Florida crappie guide, Jack Smith, has long been a fan of fishing at night any time of the year, but in the summertime, it’s something special.

Smith’s addiction to crappie fishing at night led him to develop his own brand of crappie lights. He offers a 2-foot and a 4-foot model for use with either 12-volt or 110-volt power. Needless to say, these green light-emitting tubes are the primary tool an angler needs to successfully catch crappie at night.

Maybe the most impressive element of this type of fishing is that there is no structure needed. We were fishing in Florida, a West Volusia County lake that Smith refers to as a “forest lake.” It’s like many others in or near the Ocala National Forest. We were about to create our personal fishing hole.

“There’s absolutely no structure in this lake,” explained Smith. “We will find a spot, put the lights out, and let them go to work. Once we activate the lights the fish are going to come to us.”

Starting just before sunset Smith navigated a short distance into the lake. There was no visible structure on the sonar. The bottom was relatively flat in about 12 feet of water.

“I have never fished this spot before,” revealed Smith. “I am going to hang two lights, each from a 5-foot PVC pipe. Then I’ll light up the side and front with four 1500 lumen LED lights to add visibility above the water.”

With the lights set and illuminated, Smith loaded the rod holders with crappie poles.

“I’ve got long poles and short poles”, explained Smith. “Starting in the middle I’ll put a 12-footer out, then a 10-footer, and then two shorter 6-footers. Each angler has two long poles out beyond the lights and 2 short poles close to the lights.”

“There’s absolutely no structure in this lake. We will find a spot, put the lights out, and let them go to work. Once we activate the lights the fish are going to come to us.” ~ Jack Smith, Florida Crappie Guide

“The gars are your friend,” added Smith. “They are feeding on the same stuff as the crappie and once you start seeing gar in the lights, the crappie won’t be far behind. Some people would move when the gar show up, but you don’t want to. Stay right there with the lights and be patient.”

All Smith’s poles are the same single hook rig. He places a 3/8-ounce egg sinker on the mainline with an #1 Eagle Claw rotating hook about 18 inches below. Smith is a deep-water crappie angler. He normally lets the weight down to the bottom and cranks up about 3 or 4 turns.

“Ninety-nine percent of the time these nighttime crappies take that bait and swallow it,” said Smith. “For that reason, I like a big hook. I have used a #1 for years, and it works. It’s a big hook, but with most fish swallowing the bait I can get my finger in the bend of the hook to unhook them.”

Smith numbers his poles from left to right. Each angler has a #1, #2, #3, and #4. Smith, who is standing center boat can see all the lines and is quick to yell out a little help when the light bites go undetected.

“I will tell you one thing about night fishing,” offered Smith. “The key is watching your line. The bigger the crappie the lighter the bite. I mean they won’t even bend the pole. You just have to watch that line, it’s critical. A lot of people have a problem watching the line so I sometimes yell out the pole number where the bite is.“

Often the rod tip starts bouncing and Smith will say, “Be patient grasshopper—that’s the minnow.”

But that nervous minnow is an indication that crappie may be near and it’s a good idea to keep an eye on that pole. The minnows can pull the line sideways too, but if the pole is bouncing it’s usually not a bite.

Smith’s final piece of advice relates to hooking the minnows. He is a stickler for pinning them so they remain lively.

“A lot of people hook their minnows through the lips or eyes,” said Smith. “The problem is they don’t stay alive. I barely hook my minnows under the dorsal fin. And I mean barely! Hooked that way they’ll still be alive at the end of the night if they’ve not been bit.”