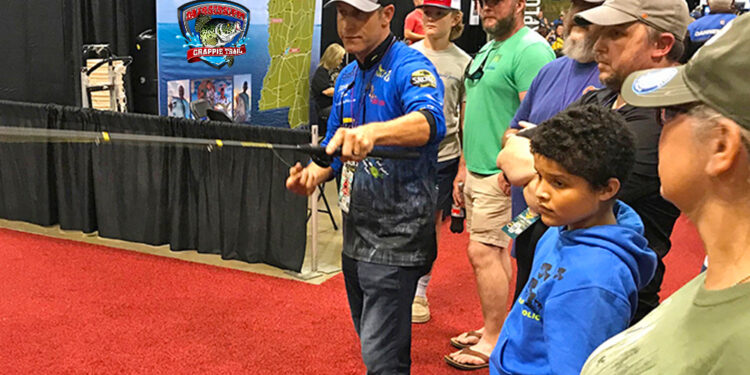 Products and Tips from Crappie Expo 2021

Crappie Expo 2021 and the Mr. Crappie Invitational Tournament were held in Shreveport Louisiana, October 1-3. Vendors filled the Shreveport Coliseum displaying boats and crappie fishing products. There were tackle dealers, fishing guides, destinations, seminars, music concerts and a fish fry. The Mr. Crappie Invitational was held in conjunction with the Expo, with a $250,000 purse and first place $100,000 payout. The Red River proved to be tough fishing but several of the teams found the secret formula for a good finish. Event attendees had a coliseum full of fun things to do, see and had a chance to win two drawings of $10,000.

Blaine Salter, Jr., Salter Jigging Pole & Tackle, has no problem shooting a bait into a coffee cup at 40 feet. He can even wrap it around a stool and drop it in a cup. His shooting demonstrations are incredible. One of his poles is an IM-7, 10-footer. The pole has shooting rings on it with 20, 30, 40 and 50-foot marks making it easy to shoot a specific distance every time. “It’s like shooting a bow and arrow,” says Salter. “You need a good anchor point and be consistent. My pole is strong with special features that will help any fisherman be a better shooter.”

Andy Lehman, AAC Crappie Stix, says, “One of our poles is the ACC 12-foot Super Grip pole. It has a Crossover Handle meaning the grip is a tacky-feel rubber that doesn’t get slippery in rain and snow. It has a mid reel seat for better balance. The rod has a good backbone that has allowed us to swing two-and-a-half and three-pounders over into the boat, but I don’t recommend doing that. The pole is great for LiveScoping and vertical jigging. It also comes in a 13-foot model. We wanted to build a lightweight rod with lots of backbone and this is it.”

Jenko Fishing has a new, improved Whirly Bird Jig with a spinner on the hook next to the head. Will Robey, Operations Manager for Jenko says, “The spinner is different. It comes through the water with a whole lot of flash but is more subtle than other type spinners. We recently made a redesign adding a Mustad J-style hook and a j-wire keeper that’s epoxied onto the hook so it’s more solid. Most underbody spinners have to be moving about 0.7 mph to get a good flash, but these jigs will spin at 0.1 to 0.2 mph. It’s good for single-pole applications like casting but will work when spider rigging, too.”

Redneck Rubber has one of the stoutest jigs available for crappie fishing. “We offer it in a 1/16-ounce with a #1 hook and a 1/8-ounce with a 1/0 hook,” says Chris Holson with Redneck Rubber. “We call it the Raptor because Todd Huckabee says when a fish gets big their only threat is from a bird, so Redneck Rubber Raptor became the name. The bait focuses upon LiveScope fishermen who are pitching to roamers or catching them from trees.”

How Important is a sensitive pole tip? John Godwin helped design BnM Poles Duck Commander Series of crappie fishing poles. “A sensitive tip,” says Godwin, “is very important when pulling jigs like I do a lot. The soft tip won’t let the crappie feel the bait and spit it out like they will when using a stiff pole. The limber tip helps with setting the hook, too, so the hook doesn’t pull out its mouth. But the pole has enough backbone to let me control the fish without it getting in the other lines.”

Crappie Mafia is working to make a big splash in the crappie market next year. They have several jigs to introduce including the Googan Dingle Dart. It comes in a 1.75-, 2- and 2.5-inch sizes. Isaac Payne, Dir. of Innovation Design for House of Outdoors, says, “The bait has a beefed-up front for a big profile and flat front to fit against the jig head. It tapers down to a slender tail for more movements. Our bait is softer so it has a more supple and natural feel. Baits include both salt and Smart Sauce. The crappie baits hit the market in early 2022.”

Stephen Turner with Magnolia Crappie Club says, “We come here to support the event, our sponsors and to spread the word about 3-pound Mississippi crappie. We are the only club here at this awesome show. We’re proud of the Magnolia Club’s Haden and Dan Jefferies who finished tenth in the Wally Marshall Invitational tournament.

There is nothing like a quality pair of shades. Hook & Bullet Purpose Built Optics has that solves the problem of not being able to see your electronics because of polarized lens. The new LightPro Lens by Ziess has a 47-percent polarized lens that eliminates a blackout screen. The company also has the option of a gradient lens that lets in more light at the bottom where you look at your electronics and darker at top for running the boat.

The 10- and 11-foot Pro Balance by Grizzly Jig Company are their newest poles. “It’s a spin-off of our 9’6” Grizzly Elite Super,” says Wade Mansfield, “but what we’ve done is make the pole with a weight system in the butt of the handle. The removable weights allow a very sensitive, balanced pole no matter what weight reel is used. It comes with a quality cork fly-rod-style handle. The cork doesn’t absorb vibration like foam so it’s lighter weight and more sensitive. We believe it is one of the best jigging poles a fisherman can buy.”

“LiveScope is the thing now,” says Eric Howard, owner of HH Rods & Reels. “Our 13.5-foot WarPig was designed by Frank Haidusek and Mark McClure. It weighs only 7.6 ounces and comes in a rear-seat or mid-seat. It has a solid Portuguese handle, 15 eyes plus the tip and is made of IM-8 graphite and carbon fiber. It has enough give in the pole to allow baits to be pitched out for more distance instead of just being pushed out. It’s a great pole to match with a spinning reel for a balanced, lightweight LiveScope rod that won’t fatigue you at the end of the day.”

Bobby Garland Baits found a unique niche with the Itty Bit series of crappie baits. “These baits are based upon designs of our other baits,” says Product Manager, Gary Dollahon. “We introduced our latest design, The Itty Bit Slab Hunt’R, in July of this year. The size is small but it has a bigger profile than other small baits. The tail is like a propeller so it has a lot of action with very little movement. I see this bait taking on a life of its own as a short bait with a big profile for its size that will work with many techniques.

Crappie bait colors? Wyatt Tucker is a pro staffer for Brushpile Jigs. “Of course, I like the like Wyatt’s Blue Magic color and the companies newest color, Hulk (green with flake and bright glow chartreuse tail). “I’ve been doing tournaments for six years and go out fishing every weekend. I get to try new stuff and there are a lot of colors and styles to choose from. My tip is to use different colors to see what the fish want. It’s okay to use whatever color looks good to you and not just the popular ones. Fish see colors differently and you never know which ones will work until you try them. When you find a color they like, stick with it.”

Mike Jones, program manager for Outdoor Marketing at Visit Mississippi, was on hand to share information about the new Mississippi Crappie Trail, six reservoirs featuring the best crappie fishing in the Magnolia State, if not the world. “The analogy that I can give is that everybody is familiar with the Robert Trent Jones Golf Trail in Alabama,” said fishing guru and crappie-fishing journalist Ron Wong. “This is essentially the same thing … except it is for crappie fishing in Mississippi.” Read more about it in Larry Rea’s CrappieNOW article [HOTLINK TO ARTICLE IN THIS ISSUE]

Of course, CrappieNOW Online Magazine was present with a booth featuring our magazine and the new Mississippi Crappie Trail website and mobile app. Dan and Sue Dannenmueller and Matt Mullikin enjoyed visiting with the people attending the Expo.