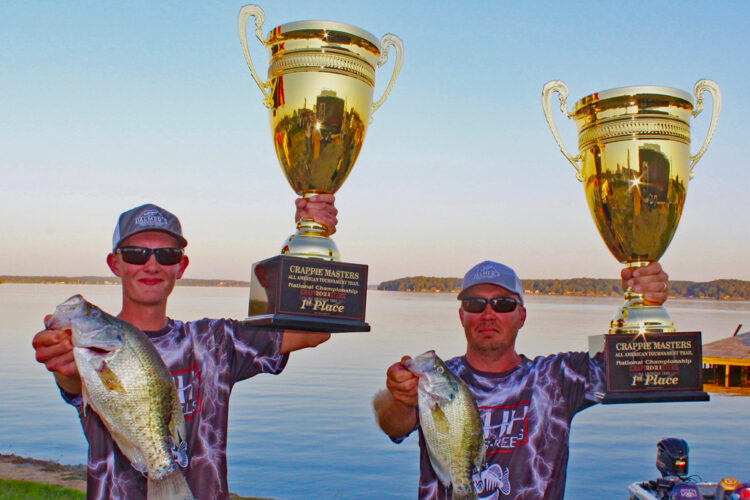 Alex and T.J. Palmer show off two of the slabs and their championship trophies for
winning the 2021 Crappie Masters National Championship on Lake D’Arbonne.

It isn’t that unusual for the winners of a major fishing event to get excited or even get a tear in their eye.  But when it happens – and it becomes contagious, spread to the entire crowd watching – it’s something extra special.

That’s what happened when the final crappie had hit the scales in the 2021 Crappie Masters National Championship, held Sept. 22 to Sept. 25 on Lake D’Arbonne, leading to the crowning of father-son team T.J. and Alex Palmer as champions.

The H&H Fishing Rods & Reels team from Clinton, Missouri weighed in two daily seven-fish tournament limits totaling 24.66 pounds. They also captured the big fish of the event, a 2.55 lb. slab that actually propelled them to the win mentally and at the scales.

It was a dream come true just for the Palmers to be standing on the weigh-in stage. But when it came down to only one more team that could beat them, it was almost too much for the father-son duo.

They nervously watched the final team — first day leaders Richard Bowling and Gary Lee, also of Missouri — weigh in, coming up just a few ounces short. Then reality set in. The Palmer’s were the champions and claimed the $30,000 check that came with their newfound title.

“Oh my gosh. Whooaaaaaa!”, exclaimed T.J. “I’m just speechless. I never thought in a million years I’d be standing here right now. Alex and I are very, very blessed.  I mean…I can’t even talk. I don’t even know if this is real,” he said as he put his hand on his son’s shoulders.

But it was real. And after watching the father and son embrace and celebrate together, plus hear their humble comments, the whole crowd became Team Palmer fans in an instant and gave a rousing round of applause.

“We caught that big fish at about 11 am Friday and up to that point, we didn’t have anything,” Alex said. “We knew that was something special because the big fish aren’t very plentiful this time of year. We didn’t want to waste that opportunity to build off that fish. So, we put our heads down and got to work to catch big fish. It wasn’t easy. We had a hard time finding big fish. They were just scattered everywhere.”

It was the largest Crappie Masters championship event ever, with 139 team boats probing the waters of the 16,000-acre lake at the edge of Farmerville, Louisiana in Union Parish. Anglers found the fish a bit finicky coming off the summer bite, but a cold front that pushed low temperatures down from around 70 degrees to 50 degrees the two days of the tournament seemed to help the bite pick up. One thing for sure, it makes the fishing easier on the anglers than the highs that had been in the 90’s.

The Palmers are the first – ever adult/youth team to claim a national championship. Alex is a 16-year-old junior in high school. But he played a bigger part in the win than just catching fish this weekend. One of their key baits was Palmer Stinger jig tails, a creation of his. The Blue Pearl/Chartreuse tail was key with the single tail catching most of their big fish.

“I started Palmers Custom Baits in my garage when my school was quarantined when I was 15 just to keep me busy, and just making them for us,” he said. “People started wanting to buy them from me and it just kicked off for me. We used them for a lot of our fish in the championship and it paid off!”

The team of Clay Gann and Todd Froebe from Lindale, Texas moved into second with 24.38 pounds. Defending national champion Eric Cagle of Tallassee, Alabama, fishing by himself, took third with 24.38 pounds. Bowling and Lee slipped to fourth with 24.09.

Anglers Wes Barmore of Dubach and Mark Theodos of Choudrant were the top Louisiana team finishing in fifth place. To say it was close is an understatement. The top five spots were separated by only 0.82 pounds. D’Arbonne locals Chris Fields and Jared Riser of Farmerville were eighth and Wesley Miller and Justin Smart from the Minden area were 10th followed by Heath Rogers of Farmerville and Lance Bilberry of Ruston in 15th.

Matthew and Bruce Rogers took Angler Team of The Year honors and placed sixth with a weight of 23.72 pounds. More than $125,000 in cash and prizes were handed out to the winners at the end of the two-day tournament Saturday, Sept. 26.

Overall, the 139 teams caught a lot of fish, but they weren’t nearly as a big as fish are earlier in the year on the ‘Bone. The average weight of fish was 1.34 pounds with an average two-day team weight of 16.80 pounds.  Only 14 crappie were weighed in that weighed more than two pounds.

Crappie Masters will return to Lake D’Arbonne for a national qualifier event on February 25-26, 2022.

(Kinny Haddox has been writing magazine and newspaper articles about the outdoors for 45 years. He publishes a daily website, lakedarbonnelife.com and is a member of the Louisiana Chapter of the Outdoor Legends Hall of Fame. He and his wife, DiAnne, live in West Monroe, Louisiana.)