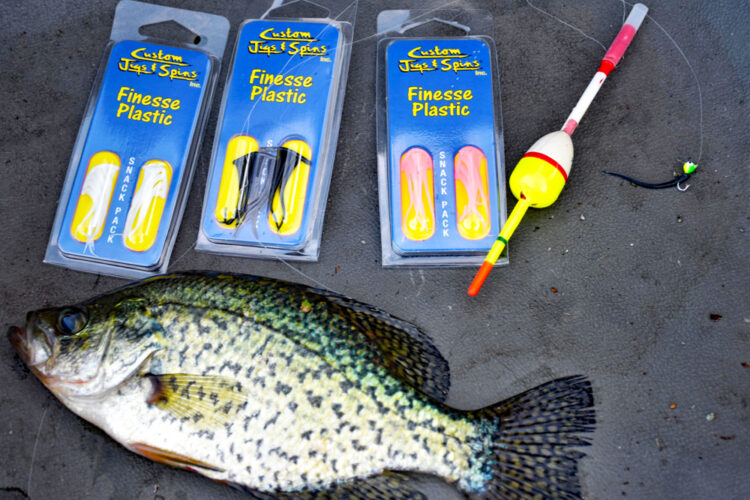 Fishing with slender plastics is dynamite for crappies

We all remember wedgees back in high school. It was always better to be the wedgor than the wedgee! But serious crappie fishermen won’t mind this kind of wedgee.

The Wedgee I’m talking about is an ice-fishing Finesse Plastic sold by Custom Jigs and Spins. There are other long, slender ice-fishing plastics. Northland Tackle’s Impluse Bloodworms are a similar product and have the added attraction of scent. While the Wedgee is hailed as an ice-fishing jig, it works equally well in open water. The long slender tail dances, quivers and twitches driving crappie crazy.

Fishing slender plastics with tiny ice-fishing jigs is a challenge. It’s not like sitting watching a cork all day; quite the contrary.

“I don’t know what it is, but crappies seem to like anything with a tail.” ~ Jeff Sowa.

Fishing the plastics for panfish requires accurate casts with tiny baits sometimes in windy conditions, the skill to detect often subtle bites and the ability to identify productive structure. It’s hand-on and challenging and that my friends are what makes it so much fun.

Being successful with slender plastics requires specialize tackle to do it right.

Longer, sensitive rods, like St. Croix Rods new 7’ and 7’3” medium-light power, extra-fast action panfish spinning rods (PNS70MLXF, PNS73MLXF) are perfect for casting and working tiny jigs on light line. The medium-light power, extra-fast action and added length make it easy to accurately throw small jigs with a float. Match the rod to a smooth operating spinning reel from Shimano or Okuma and load it with a clear 4- or 6-pound test fluorocarbon or mono and you’re in business.

One of the best ways to fish slender plastics like the Wedgee is to thread it on a 1/64- or 1/32-ounce Majmun tungsten jig. The Majmun jig gets down quickly. Catch the very tip of the Wedgee and thread about a ¼ of an inch on to the hook so the body stretches out parallel to the hook. Add a dab of super glue to keep the plastic from getting pulled off.

Fish the lure below a slender Thill or Eagle Claw float or bobber. Remove the spring on the bobber and replace it with a piece of tubing. Ideally, the bobber will lie on its side until a fish grabs it then the float stands up and sinks. It’s the ultimate strike indicator. Use anywhere from two to three feet of line below the float. Crappies typically suspend in 10 to 15 feet of water or more, but they’re always looking up. Other times they’re barely under the surface when relating to sunken docks, pilings and brush.

Pugnacious bluegills usually grab the bait and the bobber shoots under. Crappies on the other hand are more deliberate. When a crappie bites the bobber will quiver, stand up and then slowly start sinking when a slab speck has sucked in the plastic. Matching the Wedgee color to a two-tone Majmun jig produces a particularly attractive combination. The best Wedgee colors are white, chartreuse, black and red. I haven’t tried their new glow colors yet. Black and red are deadly colors in the Northland bloodworms.

Hooks on the Majmun jigs are super-sharp and stick even the most finicky crappies. The line tie of the jig is angled which makes it perfect for swimming. When crappies are aggressive, they swallow the lure. When they’re a little more finicky they sometimes nip at the tail of the lure. I simply pinch some of the body off then to shorten up the lure. Then the super-sharp hook on the Majmun jig sticks ‘em.

Accuracy is paramount when working docks and pilings. I like to use my Minn Kota trolling motor in reverse so I can position to make a cast parallel to the dock or along several pilings. Doing so keeps the bait in the strike zone for a longer period of time. Once the bait settles, pop, twitch and jiggle the offering back and repeat. Many times you can take a speck off every dock post and sometimes several. When a dock or particular piling is productive you can change plastic colors and go back and snake several more fish off the same structure. Flooded docks are a magnet for crappie all year long.

Friend Jeff Sowa and I decided to his local lake that’s known for its panfish. We knew the bluegills were bedding, but I wanted to see if the crappies were in their usual haunts first. I’d been doing well on the crappies for more than a month. I wondered if the warmer water would send them to the river channel or the deeper basin of the lake.

We sidled up to within casting distance of a favorite boat dock and I cast my bobber and jig to one of the outside dock posts. The float started to quiver as soon as it hit. Even though it was 10 foot deep along side the piling I only had the jig 3 feet under the bobber.

“There’s a crappie!” I announced before I even set the hook. The foot–long speck bulldogged for bottom before I unceremoniously flipped him over the side of the boat. The next cast landed in the shadows right behind the outboard motor on the boat in the slip. The float shot under this time as several crappies vied for the prize.

We continued working along the docks using the trolling motor to get into ideal position. I caught eighteen crappie, putting a half dozen to the fish basket before we decided to chase bluegills. Jeff hadn’t touched a keeper crappie with his worm and hook.

It was clear, in this case anyway, the Wedgee worked wonders.

(Mike Gnatkowski has been an outdoor writer/photographer for more than 40 years. He has a degree in Biological Journalism/Outdoor Writing. His writing and images have been published in dozens of regional and national publications. Mike’s been a Great Lakes charter boat captain and river guide in another life and is an avid waterfowler and upland bird hunter. He fishes crappies every chance he gets from his home in Muskegon, MI.)