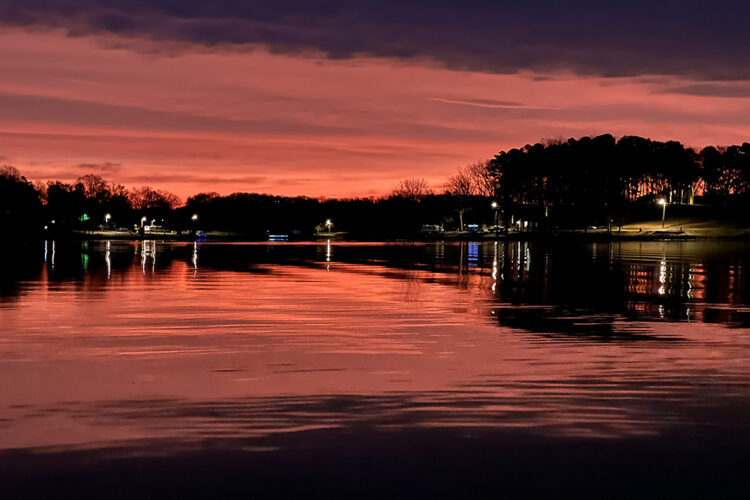 A recent “red sky” sunrise over Tennessee was clearly indicative of approaching storms,
and the truth about a well-known warning for sailors. (Photo: Richard Simms)

Crappie Basics: Red sky at morning – you know the rest

Commenting on Facebook about the photo above, Laura Sanders, wrote, “I said this to our daughter on the way to school this morning and she goes, ‘Huh? What does that even mean?”

If you ever wondered what it meant, or if it was true, a recent morning in Tennessee told the tale. Indeed, about three hours after the photo was taken near Chattanooga, Tenn., an intense line of storms rolled through the area. CrappieNOW Editor Richard Simms joined a line of fishermen scrambling to get off the lake as lightning flashed and thunder rolled across the area.

Most knew the weather was coming because they had been told by weather experts like WTVC-TV Meteorologist Brian Smith. But the brilliant morning red sky put an exclamation point on the warning.

“I’d say about 60 percent of the time, there is much truth to the saying,” said Smith, who added that his Facebook feed was inundated this morning with photographs similar to the one above.

“Of course, our storm systems generally move in from the west,” he said. “And this front had a very well-defined leading edge moving in at sunrise. So, you had the morning sunrise poking its way underneath those high and mid-level clouds, creating that dramatic ‘red sky.”

According to Wikipedia, the concept is more than two thousand years old and is even cited in the New Testament (Matthew 16:2-3) as established wisdom that prevailed at the time.

Because of different prevailing wind patterns around the globe, the traditional rhyme is generally not correct at lower latitudes of both hemispheres, where prevailing winds are often from east to west. But, as Smith points out, the rhyme is often correct in our middle latitudes where, due to the rotation of the Earth, prevailing winds travel west to east.