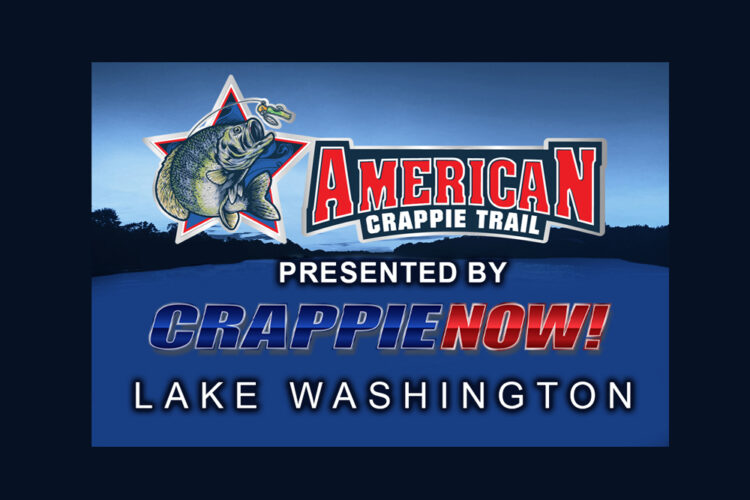 Unusual sweltering heat greeted 35 teams to the American Crappie Trail (ACT) tournament presented by Crappie Now on Lake Washington in mid-May.  However, a passing heavy thunderstorm after the day one competition cooled the second day but rose the lake level for the anglers.  Greenville and Washington County Convention and Visitors Bureau (www.visitgreenville.org) was the host of the tournament.  Launch ramp and weigh-in venue was provided by Mike Jones’ Bait-N-Thangs/Southern Star RV Park.  Unusually hot weather greeted the anglers for the official practice days (May 9-12) with daytime temperatures in the low 90’s with high humidity and for the first official tournament day.  Lake Washington (located approximately 25 miles south of Greenville, MS) is an old oxbow lake created by the Mississippi River years ago.  The average depth of the lake is 6 feet and the deepest parts at 22 feet. During the major Mississippi River floods of 2011 and 2016, it affected Lake Washington by leaving thousands of Asian carp to reside in the lake.  The river normally does not affect the lake level.  Lake Washington is a well-noted crappie fishing lake with slab crappie being caught year-round and the weights at the ACT tournament certainly showed that.

Winning the American Crappie Trail Tournament presented by Crappie Now at Lake Washington was the son/father team of Hayden and Dan Jefferies.  They had a 2-day total weight of 14 fish weighing 25.60 pounds and winning $9,500.  During the practice days, they did not catch many fish as they scanned the entire lake for spots to be fished during the actual tournament days.  They did occasionally drop a bait to see if the fish would bite. After the first tournament day Hayden and Dan finished in 1st place with 12.95 pounds.  The fish caught on day 1 were 9-12 feet deep near the bottom of the lake.  The bait had to be presented in a still fashion.  On day 2, it was mid-morning when they figured out the fish had moved a bit shallower due to the rise in the lake from the heavy thunderstorm the night before.  7-8 feet was the magic depth on day 2 in the same areas they fished on day 1.  Their best pattern was fishing very slow with a Mid-South clear with red & green glitter tube on a 1/16th ounce jig head tied to 15-pound test fluorocarbon line with a ¼ ounce tungsten weight above the jig. As Hayden said, “we had to weed through the junk fish (carp & gar) to catch our fish.  By moving slowly, we would watch our graph for fish that was not moving but staying still and those would be the crappie we could catch.  The junk fish were always moving targets”.  To be successful using livescope per Hayden, only one angler is normally fishing.  Hayden said, “my dad is busier than I in the boat during tournament day as he not only handling the net but keeping baits tied on, tending to the fish in the livewell to keep them healthy, sharpen hooks and a myriad of other things to make us successful’.

Finishing in 2nd place in the tournament was CarZone USA sponsored team of Richard Faulk and Chris Fuller.  They had a two-day total weight of 23.37 pounds. They also won an additional $500 for the B’n’M Pole contingency bonus for highest finishing team using B’n’M rods and $287 for 2nd largest crappie.

Finishing in 3rd place at the ACT tournament presented by Crappie Now was the B’n’M pro staff team of Steve Coleman and Ronnie Capps.  With the practice they had, they felt like the tournament could be won fishing shallow, so the practice days were spend covering all the shallow areas of the lake.  They had a total 14 fish weight of 23.28 pounds.  Due to fishing shallow water and not to spook the fish, Capps and Coleman used the B’n’M 20-foot Little Mighty pole with 8-pound test line.  The best bait was a 1/16th ounce Meat Getter jig rigged with a Mardi Gras colored Crappie Magnet fished 3-5 feet deep near shoreline wood cover.

The winning teams have some tips for fishing post spawn crappie on any oxbow lake:

Thanks to all the sponsors of the American Crappie Trail and especially to Crappie Now for being the presenting sponsor at Lake Washington.  Special thank you to the Greenville and Washington County Convention and Visitors Bureau and Bait-N-Thangs/Southern Star RV Park for hosting the tournament. There are two qualifying tournaments remaining on the schedule this year for ACT: Truman Lake on June 3 & 4 and Grenada Lake on September 9-10.