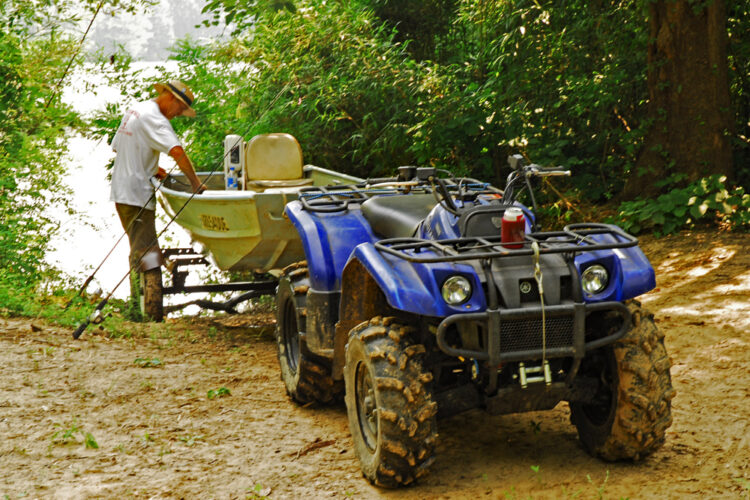 4-wheeling into a remote pond in the White River National Wildlife Refuge provides crappie
fishermen with a rare escape from the hustle and bustle of most crappie lakes. (Photo by Richard Hines)

If you had told me years ago, I would be riding on the back of an ATV, pulling a boat & trailer through swamps, mud holes, dodging limbs and briars – all to catch a crappie – even though I’d never done it, I would have said, “sure whatever it takes.”

Over the years I have tried about every crappie-fishing method imaginable, or so I thought until I fished with a good friend, Jamie Kellum, in southeastern Arkansas. It was the first of many trips that still rank among some of my best fishing trips, muddy trails and all. We were fishing on the Dale Bumpers White River National Wildlife Refuge.

On my first trip Kellum showed up at 6:00 am pulling a jon-boat on a rickety trailer with an ATV in the back of his truck. He told me, “This is how we fish around here.”

I told him his new ATV looked good but the seaworthiness of that old beat-up jon boat was questionable. In any case, if it meant bigger and more fish, I was willing to try it. We headed off into the bottoms on the refuge’s North Unit which was also the same trail I followed the previous winter in a boat where we were hunting ducks in flooded timber.

Originally established in 1935, when it was called White River National Wildlife Refuge, this piece of bottomland hardwood forest quickly became known for wintering large concentrations of migratory waterfowl. From December 15 to March 1, the South Unit of the refuge is closed to all public access providing a sanctuary for waterfowl. However, on March 1, the gates open allowing anglers and other users access.

Although there are occasionally delays opening due to routine flooding, it is a busy day with anglers from across the region pursuing bass, bream, and crappie.

Today, this 160,000-acre bottomland hardwood forest is only a fraction of a forest that once covered millions of acres throughout the Lower Mississippi Valley. Anglers traveling across this floodplain will have a view of what the region looked like in decades, or centuries, past.

Anglers will find 300 natural bodies of water ranging from a half-acre up to ten acres, all interspersed along 90 miles of the White River. Most are accessible by well-maintained gravel roads but for those who want to see the backcountry, hunters and anglers are permitted to access designated portions of the refuge with ATVs. According to Refuge Biologist, Jay Hitchcock, “Anglers will find around 350 miles of ATV trails, many of which lead to oxbow lakes.”

Sometimes trails or sections of the refuge may be closed due to flooding that regularly occurs in this part of Arkansas. Hitchcock added “because of routine flooding, fishing is not always consistent.”

While this can be frustrating that may result in a cancelled trip, flooding helps refuge fish populations. In some years, up to 90 percent of the refuge may be flooded with backwater resulting in trail and facility closures.

Flooding is a natural process and as high water begins flowing out of the river channel into the forest, fish follow the current resulting in restocked lakes. Floods are the lifeline of the old oxbow lakes and resident fish that depend on this source of nutrients. During some years, it is not uncommon to see many of the smaller lakes completely dry but within a few months be able to catch a string of crappie, all thanks to spring floods.

The success of this natural process is dependent on the timing of the flood and how long the bottoms remain inundated. Research on bottomland fish species has demonstrated that once the river overflows its banks, all species of fish immediately move into the surrounding land to take advantage of the newly exposed food sources and many fish remain behind either by choice or not.

You won’t see trucks parking around the parking lots of these lakes. That’s because its ATV and UTV access-only and many anglers are finding that the ATV is not just for hunting season. With more than 300 lakes ranging in size from a quarter-acre to ten-acres, a small trailer hooked to the back of an ATV provides access for you and your jon boat or kayak putting you in an isolated location for an enjoyable day of crappie fishing.

Anglers who have learned to maneuver an ATV pulling a small trailer/boat combination along sometimes narrow woodland trails will likely be rewarded with lighter fishing pressure and hopefully more fish. Some lakes are relatively close to the road but before you strike out across the bottomland forest, check online refuge maps. Also note that ATVs are not allowed on gravel roads except during loading and unloading at parking lots.

Big boats are out for back country trips as well. These trips are back to the basics. Plan on traveling light as some lakes may be a mile back in the woods. In most cases, the trip will be worth it, not only for crappie but plan to catch bream as well. If you don’t have an ATV, there are over two dozen boat improved or semi-improved ramps that are easily accessible by two-wheel drive vehicles. There will be more pressure on these lakes, but I have still caught fish.

Because of regular closures or flooding, most fishing opportunities will be during the summer months. I rarely used live bait and most cases threw 1/8 oz. black and chartreuse tube jigs with an ultra-light rig.

Some oxbow lakes may appear devoid of cover and if brush is evident watch the shoreline where there may be evidence of cover from a missing tree or treetop. Crappie also stage 20-30 feet out in the lake from cypress particularly in the summer. This is also a good location to troll, while occasionally casting into areas of cypress trees. When you hit a fish, stop, and cast around a few minutes before moving on.

Dale Bumpers-White River is one of the few national wildlife refuges that allow camping and most of the sixteen campgrounds are near lakes or ATV trailheads.

Before heading to the refuge, check road conditions and possible closures that may be in effect and you will need the Annual Public Use Permit, required for all hunters, boaters, campers, and anglers over 16 years of age.

The refuge maintains an excellent online map which shows locations of all facilities.

Regardless of the catch, you will enjoy some of the most majestic cypress trees and unbelievable beauty found anywhere in the southeast

(Richard Hines is a Wildlife Biologist, book author and award winning freelance outdoor writer and photographer.  Since 1985, Hines has published hundreds of articles on hunting, fishing, conservation, wildlife habitat management, and natural history. Hines is currently President of the Tennessee Outdoor Writers Association and serves on the Board of Directors of the Southeastern Outdoor Press Association.)