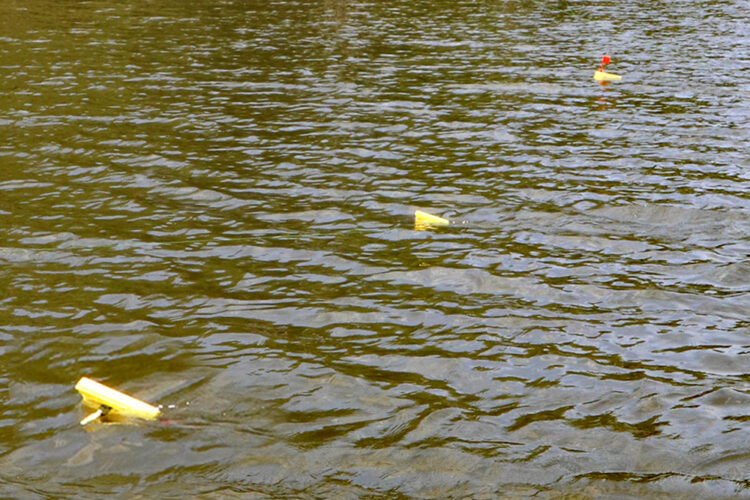 Planer boards are a good way to separate baits for a wide area of coverage. Getting them away from the boat will get bites from fish that may be spooked from under the boat, too. Crankbaits, jigs or a combination can be trolled to trigger bites. (Photo: Tim Huffman)

Crappie generally do not like current and will often go out of their way to escape current. Sometimes the best escape is to retreat into an oxbow.

Oxbows are typically bends in a river that cut “cut off” from the main river by a flood. That has happened on the Alabama River. And on a recent trip with CrappieNOW Publisher, “Crappie Dan” Dannenmueller, we found our way into Jackson Lake, an oxbow off the Alabama River.

“The Alabama River is my home water,” says Dannenmueller. “Years ago, Jackson Lake it was the main channel, but it got cut off when the river cut a new channel. It has silted in badly over the years but can be as deep as 30 feet at its deepest point when the water is up. Right now, it’s the lowest any locals remember it being, because the river is pulled down. We can still access the main river but not if it gets any lower.

“We are pulling crankbaits right down the middle of the channel leading to the main river. We are running a few baits deep and a few shallow ones near the tree lines. This is a tactic I use any time the water is warm. The huge advantage of this lake is the fluctuations and replenishing from the river, but it doesn’t have the strong current of the river. That’s a big deal.

“Pulling boards requires some knowledge, but it’s much simpler than most fishermen think.”

“August is a good time to fish the river or oxbows. The fish often suspend up in the water whether fishing trees or open water. They come up to the flats off the river, feed and go back down into the mud to relax and stay cool.”

Dannenmueller pulls planer boards from the front of the boat. He uses Driftmaster rod holders because of the strength and design. His poles are far bigger than what many crappie anglers use. He likes B’n’M Sam Heaton Saltwater with a very strong backbone and a sensitive tip for a balance to give good control of the boards. He uses Okuma line-counter reels because they are light and have a big handle that allows a bait or fish to be quickly reeled to the boat. Line is Gamma High-Vis 10-lb test.

“I’m using OR12 and OR38 Mini Off Shore Planer boards. The smaller ones are good to indicate strikes and they draft backwards when they have a fish. Tadpole weights are simple to use but a critical element to control depth. I run them in front of Pico and Bandit crankbaits. I also run Road Runners with Bobby Garland Strollers. I run baits separately or in tandem.”

Another key item is the Precision Trolling App that gives the exact depth using factors based upon the line size, weight and bait. Dannenmueller says it’s the quickest, easiest way to guarantee that baits are running at or just above the fish.

“I’m running between 1.0 and 1.2 mph. Slow speeds, less line out and better control makes fishing easier. The speed is still fast enough to catch a crappie on a crankbait yet slow enough a fish will hit the jigs, too.

“This oxbow connects to the river and we are fishing the channel that leads to the river. Today we have low water and the channel is silted in, so 15 feet is about the deepest water we’ve seen. We are running our outside boards relatively shallow and close to cover.

“It’s hot weather here, making for good conditions for pulling cranks. We have some wind, but we don’t have to deal with recreational boaters or skiers because of the shallow water and cover. Maybe the alligators are a deterrent, too.”

“Pulling boards requires some knowledge but it’s much simpler than most fishermen think. After learning, it’s an easy technique to do and a very relaxing way to fish.”

Family Things to Do in Elmore County

Check out the waters of the Alabama River, Jackson Lake, Coosa River and Lake Jordan. There are many fishing opportunities for a wide variety of species. There are beautiful, clear waters to dingy sloughs. Try one of the rivers, lakes or oxbows for the chance and good numbers of quality fish.

Three golf courses include Robert Trent Jones, Emerald Mountain and The Pines. Fort Toulouse is a great place for the family to see a 1,000-year-old Indian mound, old log house and fort, and learn about the War of 1812. The Alabama Nature Center, Wetumptka Impact Crater. Elmore County Museum and great hiking/biking trails are a few other things to enjoy. The Hampton Inn at Wetumpka is a great place to stay.

(Tim Huffman has specialized in crappie fishing writing and photography since 1988. He is Senior Writer for CrappieNOW Digital Magazine, freelance writer and book author. His 2022 book, Crappie Annual & Product Guide, is available in paperback or e-book from www.Amazon.com)