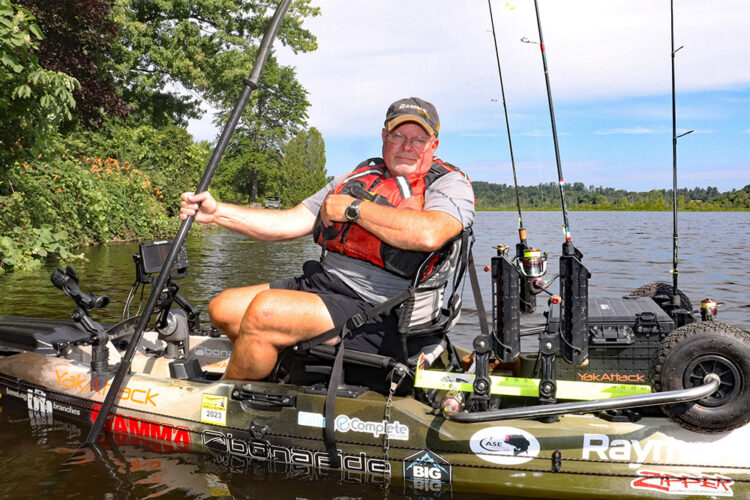 Dave Ohmer prepared for another crappie outing on a small lake in his kayak.
“Keeping it simple and moving slowly allows me to concentrate on fishing.” (Photo: Darl Black)

About seven years ago, I was introduced to David Ohmer by way of Facebook. At the time, he had been seriously fishing for crappies for only a short time. I learned Dave was following my internet NW PA Fishing Reports covering anglers’ success on regional lakes. It wasn’t until a public seminar on crappie fishing in 2018 at Pymatuning Lake that Dave and I finally met face-to-face. Afterwards, he began contributing photos and reports to the fishing report.

Dave had fished all his life, but it was casual fishing from shore for whatever was biting rather than hardcore angling. One day on a bike ride with his son along the Allegheny River trail, they noticed how many people were kayaking on the river.

“Looks like fun,” said his son. In short order they had kayaks.

It’s all about the ‘thump!’

“I always enjoyed eating crappies when I caught them, but it wasn’t until I had a kayak that I thought about targeting them. Suddenly, I was adding specialized fishing accouterments to my kayak, including an electronic fish finder.

“It was the addition of the sonar that really hooked me,” said Ohmer. “Being able to search water with electronics to locate fish really intrigued me. It was both challenging and fun to locate crappies with electronics and then catch them.”

Although Ohmer tried a couple kayak tournaments early on, competition did not interest him. But searching for a better fishing kayak certainly was on his agenda. When he moved into a Bonafide Kayak, Ohmer began to actively promote the brand, which eventually lead to his current post on the Bonified Kayak Fishing Team.

RAPID FIRE ROUND with Dave Ohmer

What is it that attracts you to crappie fishing?

Ohmer: It’s all about the thump! One hit and you know they are hooked. Crappies school up so you are going to catch more than one!

What is your favorite fishing technique for crappies?

Ohmer: I keep it simple – no multiple rods for pushing or pulling. Instead. I just cast and retrieve a 1/64-ounce jig with soft body about 80% of the time – sometimes I use a bobber; sometimes I don’t.

What are your two favorite crappie soft baits?

Ohmer: The 1-inch Case Little Fry and the 1-inch Gulp Minnow – both fished on a 1/64-ounce jighead.

What are your three most successful colors in soft bodies?

Ohmer: That would be chartreuse and white, Monkey Milk and black/green laminate.

Of course, Gulp Minnows are heavily scented, but do you apply scent to other plastic jig bodies?

Ohmer: No. I don’t believe scent is necessary when you have your presentation dialed in. The fall rate of a 1/64-ounce jig is very slow – that’s a trigger for crappies right there. Figuring out how much to move or not move the jig during the retrieve is also part of equation, as well as switching colors. I keep tweaking the presentation until crappies hit the jig repeatedly.

Do you fish hair jigs?

Ohmer: No. Should I?

Ohmer: When added weight is needed on a fixed float for long casts, I use a Rocket Bobber. But I prefer a slip float most of the time. That’s when I rig a Thill Slip Bobber.

What other lures do you use for crappies?

Ohmer: At times, crappies will hit a small crankbait – particularly along deep weedlines; it’s a nice break from casting a jig all the time. Also, when I locate crappies in water deeper than I can efficiently fish my lightweight jig, I will switch to a Rapala Jigging Rap – which sinks quickly to the desired depth. Considered an ice fishing lure in our region, it’s a bait that catches fish all year round. Deepwater crappies can’t resist its slow circular swimming pattern.

Do you ever use minnows?

Ohmer: Nope. Never. They are too difficult to transport when kayaking. No place for a bucket on board, and if you use one of those flow-through buckets tied to the side of the kayak, it is going to be in your way when paddling. Plus, the bucket becomes a real pain when it gets snagged in shallow cover like I often fish.

Ohmer: I typically carry three rigged rods when crappie fishing – jig, jig & bobber and Jigging Rap. None longer than 7 feet. Until just this past week, my favorite rod was an all-around light-action from Kistler Rod. However, at ICAST this year, Kistler introduced a new 7-foot model simply called “Crappie.” It’s perfect for my lightweight jigs and small baits. I’ll be using this model for all my crappie presentations now.

Ohmer: All my crappie rods are spooled with 2-pound Gamma Optic Yellow Panfish Line. The small diameter allows improved casting of 1/32-ounce jigs. Love the high visibility. And Gamma is extremely strong for its diameter. I’ve caught a variety of incidental species on 2-pound test, including bass, pickerel and bowfin.

Ohmer: I prefer fishing the area’s small natural lakes which are ringed with shallow vegetation, including lots of pads. Lake LeBouef in Erie County is my #1 pick, but Sugar Lake in Crawford County isn’t far behind. I also fish Presque Isle Bay, Lake Wilhelm and the bays of Pymatuning.

Ohmer: I usually do not take many long-distance fishing trips. However, there is a small lake just across the New York state line that is loaded with crappies. It’s Quaker Lake in Allegany State Park, a stone’s throw from Kinzua Reservoir. I love to fish it since the lake has minimal fishing pressure.

What electronics do you use? Thoughts on LiveScope?

Ohmer: I have a 7-inch Raymarine unit on my kayak, relying on both downscan and sidescan screens. By paddling slowly, I discover a ton of information from the sidescan due to wide coverage. Sidescan is awesome when I’m on new lakes; it puts me on concentrations of crappies around bottom structure that I would miss with the narrow path of downscan. I’ve seen demonstrations of Garmin LiveScope, and would like to try it. But since I catch sufficient numbers of crappies already, I really don’t need it. Guess I’ll wait until the price comes down on it.

How does location or fishing presentation differ between white crappies and black crappies?

What question didn’t I ask that you would like to answer?

Ohmer: ‘What is my favorite kayak for crappie fishing?’ That’s easy – a Bonafide SS127. With its special hull design, it’s easy for anyone to stand up and fish. The pedal system means you can adjust position or move the kayak without picking up a paddle, leaving both hands for fishing. Yet, the kayak moves easily and responds well to the paddle.