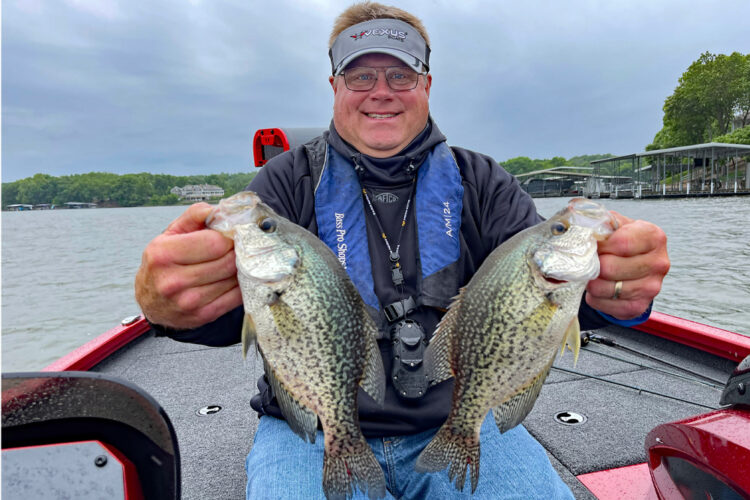 Darin Keim knows that fall can be an excellent time to fish for crappies at Lake of the Ozarks
in central Missouri. But he believes his techniques will work anywhere. (Photo: Brent Frazee)

Fish are biting but they’re often overlooked once autumn arrives

Darin Keim encourages Lake of the Ozarks residents to stay inside and watch the Kansas City Chiefs or the St. Louis Cardinals on TV during the fall months.

That leads to noticeably less fishing pressure on the often-crowded reservoir where he lives. And that can result in some spectacular crappie fishing.

“I’ve had days when I almost had the lake to myself when the Chiefs are playing or the Cardinals are in the playoffs,” Keim said. “It’s the same way with deer season. Everybody’s in the woods; no one’s fishing. I’ll listen on the radio out in my boat, but I’m going fishing.”

That drop in interest in fishing is no small deal at Lake of the Ozarks. The 55,000-acre reservoir in central Missouri is a playground lake during the summer. Especially on weekends, the wakes of boats create a turbulent chop on the water and make it almost impossible to fish in spots.

But once Labor Day passes, the activity dies down. And by football season and baseball playoffs, it can get downright peaceful on the water…just in time for the best crappie fishing of the year.

“Fall is my favorite time of the year to fish for crappies,” Keim said. “Once the nights get cool and the water temperature starts to drop, they’ll go on a feeding frenzy.

“Everybody thinks of spring for crappie fishing, but fall is much more consistent. October, November, December—those are great months.”

The key to fishing at that time of the year? Finding the “groceries.”

“Crappies are predators,” Keim said. “They’re going to be where the shad are. Sometimes, they’ll feed in packs.

“I have a video I took of my forward-facing sonar showing a school of crappies chasing shad out from under a dock, around my boat and back under the dock. Unbelievable.”

Keim keys on deep-water boat docks and uses his electronics, including both Garmin LiveScope and Humminbird Mega 360 Imaging, to guide him to the fish. He also pays close attention to his side-scan to find crappies suspended under boat docks.

Then he will “shoot” the docks with plastic baits to reach those seemingly protected fish.

“They suspend under these docks because they provide shade, they don’t get a lot of fishing pressure and they have a lot of food like shad, little panfish and minnows,” Keim said. “When you’re shooting the docks, you can get a bait back under the foam without making a lot of commotion.”

Keim uses a stealthy approach. He is careful to keep his boat as far from the fish he has marked as he can so he doesn’t spook them.

“I don’t like pushing a prop wash from my trolling motor through a school of fish,” Keim said. “If you accidentally have your trolling motor on high, it will push water right back under those docks. That will kill the bite.”

Keim often will start his search on deep, main-lake docks. His boat might be sitting in 45 feet of water but he is presenting his bait to crappies suspended 10 to 12 feet down.

He’s not the type who likes to park over a brush pile and fish vertically. He would rather fish horizontally, either casting or trolling to suspended fish.

Boat docks are a great place to start, especially at Lake of the Ozarks where there are tens of thousands of them.

In the fall, there are plenty of options. Keim catches crappies trolling or casting Bandit 300 crankbaits, casting small jerkbaits and retrieving plastic baits such as Bobby Garland Baby Shad and Strike King Slabalicious. He is a strong believer in “match the hatch” tactics.

“Whatever size the shad are, you want to match that,” he said. “Sometimes, they won’t touch it if it isn’t close to the size and profile of what they are feeding on.”

Keim has seen that at work when he uses his Garmin LiveScope, which shows real-time movement of fish.

“Sometimes you can drop a jig into a school of 50 fish and there are no takers,” he said. “Other times, a crappie will swim right up to it and just stare at it for a while. You twitch it, and that fish hits.

“LiveScope has taught me a lot about fish behavior.”

“Once the nights get cool and the water temperature starts to drop, they’ll go on a feeding frenzy.” ~ Darin Keim

November can produce outstanding fishing, especially for fishermen who like to troll. But the action doesn’t stop once winter arrives.

As long as there is open water, crappies can be caught. Keim used a frigid day last winter as an example.

“It was the coldest day I’ve ever fished,” he said. “It was 4 degrees, but there was still open water. I had to keep bumping the ice out of my guides, but I still caught fish.”

Even in the deep-freeze of January and February, a sudden warm day will move the crappies surprisingly shallow. Fishermen often use a jig under a cork in water as shallow as 2 feet.

The one constant: There are shad nearby.

Lake of the Ozarks is a baitfish factory, producing huge year-classes of shad year after year. That’s one of the reasons the big lake’s crappie population is in such good shape.

In fact, the Missouri reservoir is considered one of the best crappie-fishing spots in the nation. It doesn’t have the monstrous fish that states such as Mississippi, Alabama, and Texas do, but it has excellent numbers of 10- to 12-inch fish.

“Crappie fishing at Lake of the Ozarks is excellent right now,” said Samantha Holcomb, the fisheries biologist for the Missouri Department of Conservation who manages the lake. “High water in 2019 helped produce a very large year class of both black and white crappies.

“Those fish are all 9-plus inches now and they are providing great fishing.”

Keim won’t argue. He said the crappie population is the best now since he started fishing the big lake 20 years ago.

This is a great family lake,” he said. “Mom and dad can take the kids down here and catch a limit of crappies.

“Well, those kids are our future. They have a good experience, and they’re going to want to go fishing again.”

(Brent Frazee was the outdoors editor for The Kansas City Star for 36 years before retiring in 2016. He continues to freelance for magazines, websites and digital outlets. He lives in Parkville, Mo., with his wife Jana and yellow lab Millie.)