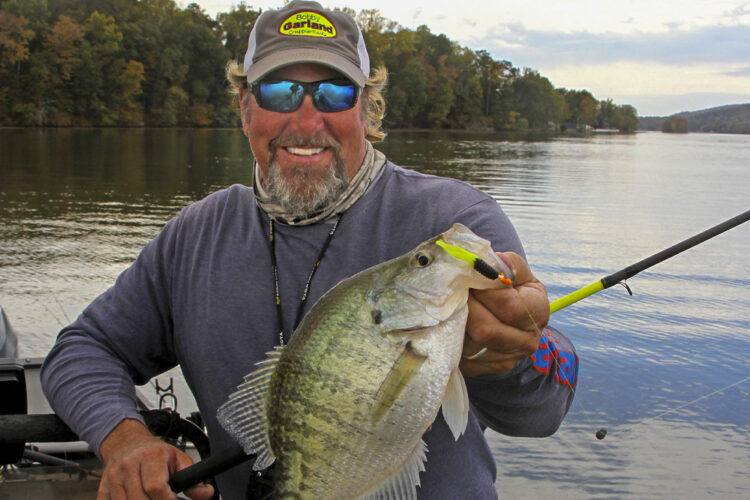 by David Rainer, Alabama Dept. of Conservation and Natural Resources

If you love to head to the woods this time of year to pursue white-tailed deer, Capt. Lee Pitts is right there with you. However, if you want to take a break from the deer stand and catch crappie on Weiss or Neely Henry reservoirs, Pitts is your man.

“If you want to catch crappie this winter, I’m ready,” Pitts said as we headed out on Neely Henry, an 11,235-acre impoundment on the Coosa River in northeast Alabama. When he’s not on Neely Henry, he’s fishing Weiss, a 30,200-acre Coosa impoundment.

“Weiss has a lot more open bays and open water,” he said. “On the days you’re dealing with wind, Neely Henry is more of a river system. In the winter, the crappie tend to get more on the ledges and creek channels in that deeper water. So, on Neely Henry, you can get protection from some of that north wind. Also, on Neely Henry, there’s a 9-inch (minimum) length limit on crappie. If you’re looking to take some fish home for the freezer, Neely Henry has great options on that. I’m not saying Neely doesn’t have big fish, because Neely has some big white and black crappie.”

The minimum length limit is 10 inches on Weiss Lake, known as the “Crappie Capital of the World.”

Pitts said finding structure is the key to catching crappie during the colder months. The guides and serious crappie anglers work with Alabama Power Company to deploy fish habitat, such as cane beds with concrete blocks.

“On these ledges, I’m looking for the brush,” he said. “On Weiss and Neely, all the guys put their own brush in. We have multiple places with cane beds. We’re putting them out off the edges of the breaks in 10 to 12 feet of water, and we’ve got some even in 18 to 20 feet of water. That gives you options if the fish have not pulled up in the shallower water. If they’re still deep, you’ve still got plenty of structure to catch these fish.”

Pitts uses a drop-shot rig with the bait deployed about 6 inches above the lead. On tough days, he’ll go to minnows, but he prefers to use a variety of crappie jigs.

“I like the Bobby Garlands, the Slab Slayers and Baby Shads,” he said of his jig choices. “With this cold water, they don’t have to move a lot to make it have action. You can just quiver that rod tip, and you still get a lot of action without moving the bait out of the strike zone. That’s what I prefer.

Pitts said his trolling technique depends on where the fish are located in the water column when they start heading for the bays.

“I think just getting out with my hunting and fishing, I think that’s what helped me heal and keep going.” ~ Lee Pitts, Fishing Guide and Cancer Survivor

“You may be in 20 to 30 feet of water, but these fish may be suspended at 10 or 12 feet,” he said. “That’s when you have to pay close attention. I watch my Humminbird electronics all through the day so I’ll know what depth those fish are staying in. I like to use either a 1/24th (ounce) or 1/16th jig head. That seems to give it more action even at a slow speed. If I have to, instead of going to 1/8th. I’ll go with a BB or some type of split shot above the bait, so I’m still getting the depth I need, but I’ve got a bait that will dance around in the water column.”

As far as weather, Pitts prefers days with some sunshine and a light ripple on the water. When it gets windy, it makes it difficult for a proper bait presentation.

“If the front of the boat is going up and down and the rod tip is jumping around, you’re not going to be very productive,” he said. “But I’ll go fishing with whatever weather we’ve got. If you’ve got a little ripple, that’ll push those fish onto the cover instead of just roaming and that will help you with the vertical bite.”

When the fishing starts to transition to the springtime bite, Pitts obviously changes tactics.

“You’re moving and covering more water,” he said. “You’re not fishing as slow or staying with vertical structure. The fish are not holding on the structure or anything in particular. They are following that bait. If you can find the right kind of bait when it starts getting to be spring, the fish are feeding up and getting ready for the spawn.”

Pitts said in late March and into April, the fish will start migrating from the bays and river channels into shallower water, heading to the backs of the creeks and tributaries.

“We’ll have two or three waves of fish that will come in during the spring,” he said. “If you follow a wave of fish as they come in and start feeding, you may find them at the mouths of the creeks and bays for a week or two. Then all of a sudden, they’re in on that secondary point, and then they’ll move all the way to the backs of the creeks and bust up in that shallow water and get on brush.

When the crappie spawn starts to wind down, the fish will start moving back out onto the main river and search for structure.

“That’s when dock-shooting starts coming into play, because Neely Henry has so many docks on the river, the backwaters and the bays,” Pitts said. “Dock-shooting is kind of like playing golf. You might hit 100 terrible shots before you hit that one. You hit that one cast just right and skip that bait under the dock and that line twitches; it’ll keep you coming back.

“Whether it’s a permanent dock or a floating dock, the fish like to get up under them and get out of the sunlight and feed up before they start migrating back to the river ledges.”

Pitts said when he gets clients from out of state, they don’t really understand the quality of crappie that live in Neely Henry and Weiss.

Not only is Pitts one of the top crappie guides in northeast Alabama, he’s also a cancer survivor. He’s convinced the great outdoors helped him through his recovery.

“I was having some health issues and, thank goodness, my wife (Laura) talked me into getting it checked out,” he said. “When they found the cancer, I was in surgery the next week to put a port in my chest. When I healed from that, they started an aggressive chemo treatment. I went through 12 rounds of chemo. They let me heal from that, and then I went through five weeks of radiation five days a week.”

Surgery followed the radiation, and Pitts said it was two weeks before he was back on his feet. The doctors told him the quicker he got up and got moving, the better it would be, but he wouldn’t be able to deer hunt that year and probably wouldn’t be able to guide that next spring.

“I had just leased a piece of property before the surgery, and it was all ridge property,” he said. “I had the surgery on September 23, and, by the last three weeks of bow season, I was climbing stands and shooting my bow. Then during the gun season, I would just sling a rifle over my shoulder and walk up and down those ridges, enjoying the woods. There were several days when I would sit on a rock and wonder if I was going to make it back or not. But I think just getting out with my hunting and fishing, I think that’s what helped me heal and keep going. I went right back into guiding. I wasn’t 100%, but I was out there pushing it.

“The biggest thing is my wife said God gave me a platform with my hunting and fishing and the people I’m in contact with. There’s been so many people who have come up to me at a tournament or on a guide trip and told me about a spouse or relative who was going through it. When they see me, I think it helps their anxiety about getting through it and being okay.”

David Rainer is an outdoor writer with the Alabama Department of Conservation and Natural Resources (DCNR) Information and Education Division. He is responsible for a weekly web column at Outdoor Alabama, production of DCNR news, feature articles and photography for Outdoor Alabama magazine. He is the former outdoors editor for Mobile (Ala.) Press-Register.